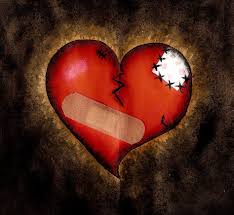 I think of hearts metaphorically speaking. Broken after a severed relationship, severed by grief or a break-up or moving or death or relational discord.

And bones. I’ve had a few in my day – two broken arms when I was younger; a broken ankle when in college. Nothing since. (thank goodness!)

Broken implies a need to be healed. Waiting for restoration. Gently cradling and nursing the hurt place, the hurt bone, stabilizing what is broken so that healing can come. It will come. But it takes time.

It was six weeks of a cast on my arm. And you begin to get used to it before finally you’re free. But being healed and being whole feels strangely light after being broken. The process is painful but the result is beautiful. Getting that cast off my arm, and my arm felt like it was light as air. Same with the one a few years later; and then several years later at college. I was only too glad to say farewell to the cast and the crutches.

Now as to hearts after being broken. Well, that’s a different story. There is no six week cure. But the healing is just as sure. Just as certain. There’s simply more waiting involved.

I’m participating today in Lisa-Jo’s “Five Minute Friday” where you write for five minutes on a topic, unedited. Fun way to get a quick blog post and stir the creative writing process.