I tried to pick out 10. I really did. Ten is such a beautifully poetic number … but I just couldn’t narrow it down. And so I offer to you my top 14 books of 2014, in countdown order (as is appropriate for New Year’s Eve). The first seven are featured today, and part two will follow tomorrow. 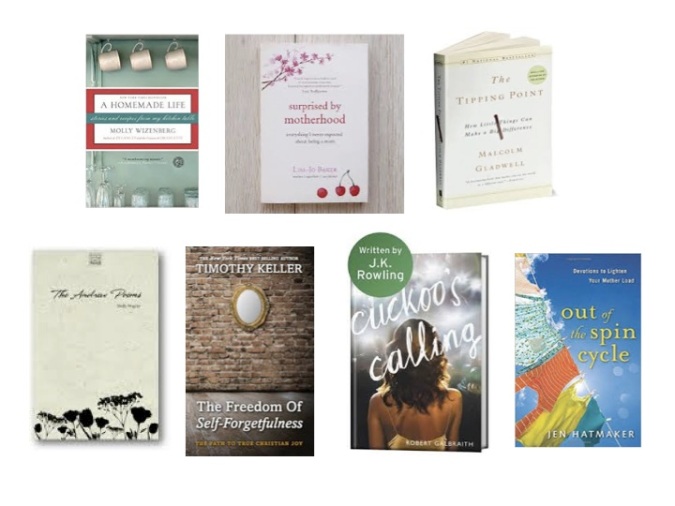 #14 A Homemade Life by Molly Wizenberg (2009) Reading her book of memoir/recipes made me nostalgic for family meals of childhood and newly resolved to offer similar meal-time rich memories for my family. Good writing, and recipes that made me want to get back into the kitchen (and typically I don’t enjoy cooking). Her chocolate cake recipe is amazing. Truly.

#13 Surprised by Motherhood by Lisa-Jo Baker (2014) She writes with beauty and refreshing honesty about her experience of motherhood and the grief of losing her own mother. It’s full of pithy truths about motherhood that you’ll underline and star and want to share on Instagram and Twitter. Like the following:

It’s a relief to know that motherhood is hard. This is the gift girlfriends can give one another – the 2 a.m. truth about parenting.

Becoming a parent is a lot like breaking up with yourself. … Children arrive and blow through what used to be your routine. It takes courage to say no to yourself and yes to someone else.

Motherhood is a sacred marriage of the mundane and the eternal.

#12 The Tipping Point by Malcolm Gladwell (2002) I am late to the Gladwell game, and I found this book of cultural commentary intriguing. He explores what causes a trend to pass the “tipping point” into mainstream, and his findings will surprise you. You’ll learn about the importance of “mavens,” the real reasons crime dramatically decreased in New York City, and what helps marketing to “stick.”

#11 The Andrew Poems by Shelly Wagner (1994) Shelly is a dear friend and writing mentor for me, and I have the privilege of attending church with her. This collection of poems written after the drowning death of her 5-year-old son are heart-wrenching, therapeutic, and exquisitely beautiful – all at the same time. She gave words to what I was feeling as we communally grieved two tragic deaths of a mother and daughter this summer.

#10 The Freedom of Self-Forgetfulness by Timothy Keller (2012) This short booklet packed a powerful punch, mainly to my pride, defined as:

Spiritual pride is the illusion that we are competent to run our own lives, achieve our own sense of self-worth and find a purpose big enough to give us meaning without God.

Yet true to Keller’s style, the conviction comes right alongside the hope of grace found in Jesus. We can’t save ourselves, and God has saved us in Jesus Christ.

#9 The Cuckoo’s Calling by Robert Galbraith (2013) My husband and I are huge Harry Potter fans, and so of course we had to also try Rowling’s books written for adults. Her first, The Casual Vacancy (2012), was a huge disappointment, but I loved this one. I saw that the next one in this mystery series, The Silkworm, came out a few months ago, and it will be on my 2015 reading list.

#8 Out of the Spin Cycle by Jen Hatmaker (2010) A 40-day devotional on motherhood and grace that I cannot highly recommend enough to all my mom friends out there. She is witty, realistic, and calls us to savor God’s merciful love for us as moms in the midst of our experience of loving (and struggling to love) our children. Enjoy these gems –

on discipline: Disciplining toddlers and preschoolers is like every mother’s personal, daily Armageddon. When we held our innocent babies, who knew we’d encounter a will of iron just fifteen months later? Who knew that they would dig their heels in and die on every hill? No one told us we’d put our children in time-out thirteen times in one day for the same offense. The obstinacy of a two-year-old can make a grown woman weep. [Can I get an Amen?]

on the problem with perfectionism: As mothers, many of us love our children exactly like we ‘love’ ourselves: critically. The standard of perfection by which we measure our own performance is automatically used on our kids.

on God’s love for us: The adoration you feel when you watch your sleeping cherubs? God has it for you. Your pleasure at fulfilling one of their little dreams? Jesus shares that feeling for you. Your bursting heart when your kids laugh? God feels the same way about your joy.

Part two will be here tomorrow – check back then. And happy New Year’s Eve!

*note: some affiliate links included (for the books – if you click on them and order them through Amazon, I’ll get a very, very small percentage of your order from Amazon)